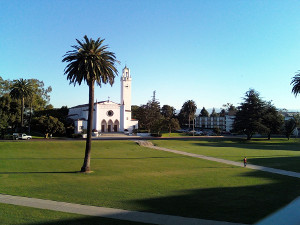 LMU is just one of the many great things about the Westchester area and this part of the West Side of Los Angeles.

LMU provides housing to about one third of the university’s enrolled student population. If you are among the majority of students at Loyola Marymount University who prefer to live off campus, Westchester Garden Apartments offers an excellent LMU off campus housing solution that will provide you with close access to the university and to the advantages of independent living in a fully furnished secure and affordable apartment that’s all your own.

Westchester Garden Apartments are situated on a one acre gated estate that features lovely gardens on a quiet residential street.

The apartments are conveniently located just a mile from the LMU campus. You can easily drive the four minutes to class at LMU each day, or take a fifteen minute ride to class at Loyola Marymount University by public transportation. (In fact, you can also walk from your apartment to the campus in about twenty minutes.)

You will also be within easy walking distance of numerous shops and boutiques, dining establishments, entertainment venues, and much more.

The beach at Playa Del Rey is just a five minute drive or a fifteen minute bus ride away, and we are conveniently located between Loyola Marymount and Los Angeles International Airport (LAX).

These apartments are fully furnished, so you don’t even need to think about finding your own furniture, cookware, or bedding to sleep on.

Our apartments feature high speed internet in all rooms, with all of your utilities included.

The back yard showcases tropical landscaping and brick BBQ.

There are clean and secure laundry facilities and bike racks on site, for your convenience.

Our estate is located in a clean and upscale neighborhood. The property is securely gated, and protected at all times by a state of the art video security system.

The property has wrought iron electronic gated parking, and insulated garages with individual lockable storage inside.

Video security systems are installed throughout the property, and you will have access to a full time on site manager on the property.

Our apartments are affordable, and we are able to accommodate student roommates.

As a mainstay of the neighborhood, we have been providing apartments to LMU students for over two decades.

If you are looking for an apartment near Loyola Marymount University, let us show you around the property. Give us a call, or schedule a tour today.

Loyola Marymount University (LMU), located in the Westchester and Playa Vista neighborhoods in the Silicon Beach area of the West Side of Los Angeles, one mile north of Los Angeles International Airport (LAX), is a private Jesuit institution of higher learning, and the second largest Catholic university on the West Coast and in California, with matriculation of nearly 10,000 undergraduate & postgraduate students.

Formed in 1973 from the merger of Marymount College (Founded in 1933) and Loyola University (Founded as Los Angeles College in 1911), LMU has been ranked by U.S. News & World report magazine as one of the top three regional universities in the Western region of the United States for the year 2018, with the seventh ranked entrepreneurship program in the country, and has been ranked by the Princeton Review organization as having among the top seven most beautiful university campuses in America.

Loyola Marymount University’s admissions standards are considered to be selective, with an acceptance rate for freshman university applications at just over fifty percent, and an average high school grade point average of well over 3.7.

Twenty five programs of undergraduate study and five graduate programs are included within the Bellarmine College of Liberal Arts.

The College of Communication and Fine Arts includes undergraduate programs in theatre arts, studio arts, music, dance, communications and art history, as well as a graduate degree in marital and family therapy.

Admission to the School of Film and Television is competitive, with less than a twenty percent rate of undergraduate admission, and the school has been ranked by the Hollywood Reporter in the top ten film schools in the United States. The school includes undergraduate programs in Recording Arts, Animation, Screenwriting and Film & Television Production, and offers graduate degrees in Feature Film Screenwriting, Film and Television Production & Writing and Production for Television.

The Loyola Law School is located in a separate campus in downtown Los Angeles. It offers both day and evening programs, and has been ranked in the top twenty five law schools in the United States by multiple publications.

The university has over 500 faculty, including several Fullbright Scholars and recipients of the Nobel & Pulitzer Prizes. The student to faculty ratio at LMU is just ten to one, and most classes at the university have twenty students or less.

The thirteen class undergraduate core curriculum encourages students to be exposed to a diversity of subject matter, including philosophy, theology and ethics & justice, among other subjects.

Like Southern California in general, the student body at Loyola Marymount is considered to be very ethnically, racially and religiously diverse. As of winter / spring of 2016 / 2017, the student body population was comprised of approximately fifty eight percent female students and forty two percent male students.

There are nearly two hundred student organizations, and over twenty fraternities and sororities represented on campus. There are nine community service organizations for students on the LMU campus, known respectively as Belles, Creare, Crimson, Espere, Gryphons, Ignations, Magis, Marians and Sursum Corda.

Ninety percent of Loyola Marymount University enrolled freshman students continue their enrollment as sophomores, and nearly eighty percent eventually graduate. Over forty percent of the student population remains in Los Angeles after graduation, and almost eighty percent remain in the state of California.

The Loyola Marymount campus is located on over one hundred fifty acres in the West Los Angeles neighborhood of Westchester, atop the Del Rey Hills, overlooking the cities of Los Angeles, Playa Vista, Marina del Rey and Playa del Rey, and the Pacific Ocean.

LMU’s sustainability commitment includes one hundred percent green waste recycling, and a solar rooftop configuration that generates six percent of the campus electrical requirements, which amounts to electricity on the order of nearly 900,000 kWh per year.

The West Side of Los Angeles has become known in the last decade as “Silicon Beach”, to reflect its status as a technology hub, home to hundreds of startup and technology companies. Loyola Marymount University has recently positioned itself as “The University of Silicon Beach”, with a new Playa Vista campus extension, housing its television and film graduate school programs, set to open in 2018.

Many LMU students and alumni have founded, worked for and interned with Silicon Beach companies, such as Snapchat, Tesla, LionsGate & IMAX. The LMU marketing school, known as “mSchool”, offers students the opportunity to interact with teams and executives at top Silicon Beach marketing companies, and many of the startups and firms in the area look to hire from a talent pool that reflects the skills and experiences that LMU provides.

Kittyhawk Apartments
(Our other location)

Flight Apartments
(Our other location)